Have you made a vision board? To make one, you flip through magazines and cut out photos or phrases that are meaningful to you, then paste them on a poster or canvas. These images inspire you in some way – who you want to be, what you want to do, where you want to go, how you want to live. A vision board is an artistic collage of aspirations, a more out-of-the-box way of setting goals without defined edges.

I wonder what clippings Jesus would paste on his vision board.

Not that he needs one; his collage would be for our benefit, not his. Jesus knew his mission. He was laser-focused on the will of the father. As the large “E” at the top of an eye chart, Jesus’ goal of seeking and saving the lost was the pinnacle of his purpose. Sure, he could see all the other letters below – the details, the timeline, the inclinations of every soul – yet all of his activity on earth fell under his one single purpose: redeeming humanity.

After he victoriously trumped satan’s temptation in the wilderness, Jesus began recruiting his disciples. The scripture gives us no indication that Jesus used a bulleted goal sheet, a list of resolutions, a detailed flow chart, or an inspiring vision board. In a story-telling voice, Matthew’s account of Jesus rounding up the disciples seems more like a casual happenstance than formal recruitment.

As he was walking along the Sea of Galilee, he saw two brothers, Simon (who is called Peter), and his brother Andrew. They were casting a net into the sea — for they were fishermen. “Follow me,” he told them, and I will make you fish for people.” Immediately they left their nets and followed him.

Going on from there, he saw two other brothers, James the son of Zebedee, and his brother John. They were in a boat with Zebedee their father, preparing their nets, and he called them. Immediately they left the boat and their father and followed him.” (Matthew 4:18–22 CSB, emphasis added)

The narrative doesn’t say, “Jesus reviewed his three-year plan, recorded his ‘Top 5’ on his daily calendar, and reflected on his vision board before heading toward the lake to enlist team members.” It simply says, “as he was walking along” (Matthew 4:18 CSB).

Quite the contrary. But how Jesus worked on earth looks different than how we often work. Our Messiah fixed his mind on his purpose of saving the world, so he saw everything through the lens of redemption.

He saw the casting of a net.

He saw the rocking of a boat.

He saw the commonplace tax office.

Yet he saw more.

Jesus saw past the tan sweaty arms casting the empty net— to Peter, the rock on which Christ would build his church despite his three-time denial. (Matthew 16:18)

Jesus saw past the family of fishermen sitting inside the rocking boat— to John, who would not only steady the swaying Mary at the foot of the cross but would take her in as his mother. (John 19:25–27)

Jesus saw past the ordinary walls of the tax office—to Matthew, whose narrative would give an eye-witness account of the Messiah, weaving threads of connection from Old Testament to the gospel (and inspire a girl named Valerie to look deeper and write about it).

As Jesus walked, he saw. He saw it all.

These sightings are living vision boards.

As we walk and go from here to there, just as Jesus did, may our eyes be open to our surroundings— to the opportunities of loving God and making him known, which are always within our view. Jesus, help us to see.

Previous Post: « 12 Scriptures for Christmas to Inspire a Heart of Wonder
Next Post: A Playlist for the Heart » 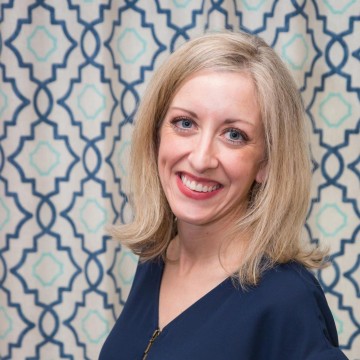 Guided Devotional to Renew your Heart.